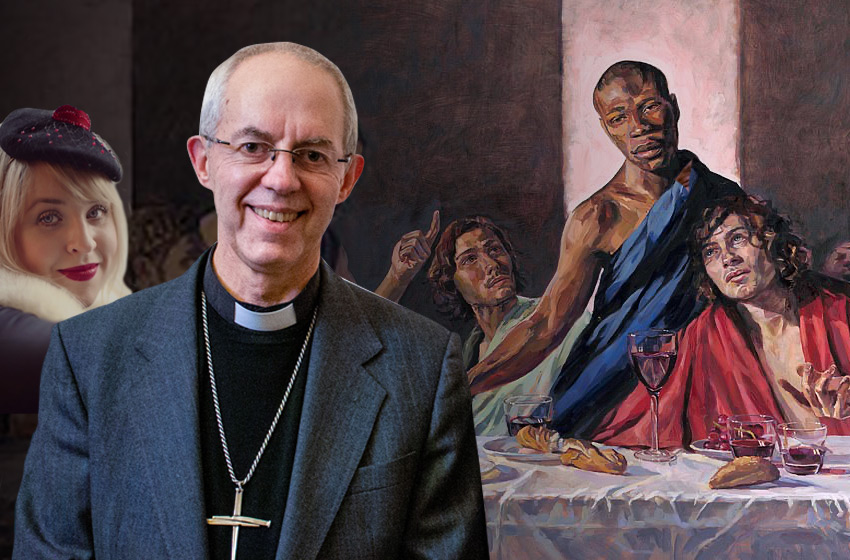 A perverse rework of the Last Supper featuring a ‘blacked up’ Jesus Christ is scheduled to go on show at St Albans Cathedral in support of the racist protest movement Black Lives Matter.

The Dean of St Albans Cathedral, Hertfordshire, has agreed to install the 9ft piece of artwork on the altar after bending the knee to the false idol of Political Correctness and ‘racial injustice’.

The painting is a bastardised rendition of Leonardo Da Vinci’s 15th Century mural, with Christ being replaced with a Jamaican-born model.

The artist, political activist Lorna May Wadsworth, decided that the cultural appropriation of a European masterpiece was the best way redeem to Leftist ‘White guilt’ for all by forcing Marxism down the throats of the faithful.

Painted in 2009, the decision by Wadsworth and the Church is curious timing given the current raging hysteria over ‘blackface.’

While the political Left, here and in the US, is busy cancelling itself, television shows, classic films and liberal comedians (who appear to have a bizarre fetish for the thing) Wadsworth’s decision to wheel out the ‘blackface’ portrait has caused widespread outrage.

“The church is not in a strong position to preach to others about justice, racial or otherwise.”

“But our faith teaches that we are all made equally in the image of God, and that God is a God of justice.

“Black Lives Matter, so this is why we have turned our Altar of the Persecuted into a space for reflection and prayer with Lorna’s altarpiece at the heart.” continued the Dean, evidently oblivious to the fact that straight White males are the most persecuted minority at present.

“Painting the Last Supper altarpiece made me really think about how we are accustomed to seeing Jesus portrayed.

“Experts agree he would most likely have had Middle Eastern features, yet for centuries European artists have traditionally painted Christ in their own image.”

That’s true, because Europe is the native homeland of white peoples and, as with many other places around the world, including Asia and South America, Christ has been depicted, by native peoples in their own image.

The cultural appropriation of the European depiction is a brazen racially motivated attack on the native peoples of Britain and Europe.

It also stands out as the latest colonial-style incursion by the Left – foisting upon other races a religion which is historically their own.

Not in the eyes of Marxists. Destroy and burn the West – that’s the agenda.

To paraphrase, Marxist radical Saul Alinsky, in his book dedicated to Lucifer, the issue is never the issue, it’s only about revolution.

This latest political stunt by the Church of England further highlights its infiltration by Leftwing radicals and activists spanning decades.

Black Lives Matter was formed by trained Marxists and receives funding from Globalists organisations and billionaires, including George Soros, with a track record of funding insurrection against sovereign states.

Last week, Leftwing activists in the Church announced that they would consider ‘blacking up’ Christ in future depictions.

Yet again, White people must sacrifice their heritage, culture and unique identity as a form of self-flagellating contrition for fabricated ‘sins’ and ‘injustices’ perceived by Marxist radicals.

The new religion of the political activists heretics that have captured the Church of England is Marxism and its adherents are the most fanatical in recent history.