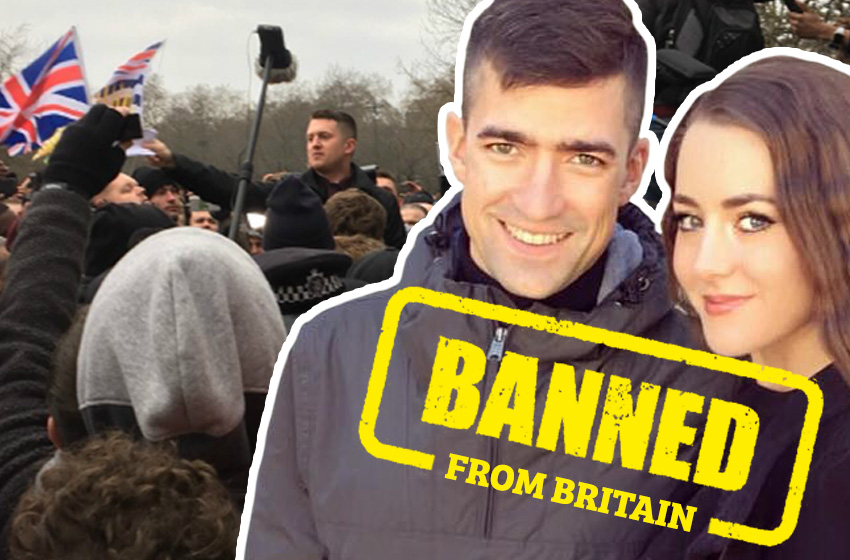 Tommy Robinson yesterday delivered a speech to thousands of onlookers at Speakers’ Corner on behalf of Austrian political activist Martin Sellner who was banned from entering Britain.

Sellner, organiser of the Austrian branch of Generation Identity, and his girlfriend, American independent journalist Brittany Pettibone, were seized by UK border police on their arrival in Britain on Friday 9 March, separated and held for three days in a detainment centre before being deported.

Sellner had intended to use the famous Free Speech platform Speakers’ Corner in London’s Hyde Park to deliver a speech of solitary to all those in the fight against the political elites’ Population Replacement agenda.

While incarcerated, Sellner revised his speech, and during an interview with the three of them, Tommy Robinson promised to deliver the speech himself in Sellner’s absence.

The banning of Sellner and Pettibone has brought further international shame to Britain.

More than 500 ISIS fighters have been allowed back into Britain, with 500 more ISIS brides on their way to further swell the ranks of the fifth-column of Islamists operating in Britain with the intent of destroying the country and murdering British citizens.

Every man and woman showing her face today, standing shoulder to shoulder, is standing up against a new totalitarianism that has been growing for far too long.

Still more outrage was to come after Canadian independent journalist Lauren Southern was also detained at the UK border just two days later, incredibly on terrorist charges, in another horrifying abuse of power by the British authorities.

In the spirit of solidarity for all those fighting to save our Western nations and culture being turned over to Islam, Freedom Post reproduces Martin Sellner’s speech in its entirety below:

Dear Friends, dear Britons, dear lovers of free speech.I assume you all are lovers of Free Speech because you have come to Speakers’  Corner.

You might not understand all the fuss happening today around this speech.

Honestly, I don’t understand it either.

My name is Martin Sellner. I am an Austrian patriot, and at the moment, I’m sitting in a detention cell in Colnbrook Bypass near Heathrow.

My smartphone was taken and my girlfriend Brittany was separated from me.

I currently don’t know where she is. We will be deported on Sunday.

Five minutes ago, they unlocked our cells and my fellow inmates are gathering in the prison wing. They are mostly illegals and eastern European criminals.

What brought me into this situation? What was my crime?

My crime was that I wanted to be here with you to speak at Speakers’ Corner.

But let’s start with the beginning. I was invited by UKIP to present my movement at an event last Autumn.

I represent Generation Identity – a patriotic European youth movement that is raising awareness about mass immigration and Islamisation.

Far-Left people call us Rightwing, people who want to shut free speech down call us ‘fascist’, and folks who hate their own culture call us ‘racist’.

In reality, we are just a group of young patriots fed up with the system, the mainstream press and lying politicians.

We use peaceful activism to make our voices heard, and contrary to our friends on the radical Left, who are probably swarming you right now, we never wear masks.

From Paris to Rome, from Vienna to London, we fight peacefully but without compromise for our freedom, our homelands and our identity!

This is what I wanted to speak about in Autumn.

But the conference was cancelled due to threats from the radical Left. The venue would not take the risk.

So they rescheduled it for March, this time keeping the venue secret – but again the terror of the Left prevailed, and the venue dropped out.

But this time I did not want to let them win. It was about principles! (Also, our flights were already booked.)

My last refuge was Speakers’ Corner. I remembered my mother telling me about that special place when I was a child. It seemed almost magical to me.

A place where everyone, without exception, could just stand on a box and start to speak to those who wanted to listen.

I have always loved this tradition of Speakers’ Corner, which seemed very British to me.

But I came only to see that this tradition – the tradition of freedom of speech in the United Kingdom – is dead.

Your country is blocking you from challenging ideas from the outside. This is a disgrace to our democracy!

I should be speaking in a neat, warm a conference room right now, and you should be sitting in comfortable chairs.

Instead, I’m in my cell and you are on the street in a standoff with the enemies of freedom of speech.

And this is very telling! Today there is a war going on for our freedom of speech. This war is being fought on the streets, by you!

Every man and woman showing her face today, standing shoulder to shoulder, is standing up against a new totalitarianism that has been growing for far too long. You can be proud of yourself. You might not even agree with me on every point – you are simply giving a statement that I should have the right to speak my mind freely.

I would love to be among you now. They prevented me from it. They locked up the speaker but I know that the speech will find a way through the iron bars.

It will find a way to you and you are going to hear what you government so desperately wants to protect you from.

Those words which they consider more harmful to you than Rape Gangs or terrorists who are let into your country again and again.

I’m going to tell you something nobody has told you before.

It’s the biggest, most obvious secret of our media our politicians and our powerholders: People of Britain, you are being replaced.

There has always been immigration in your history. People coming in, assimilating. But what’s happening today is different:

You are being replaced by massive Muslim immigration.

You see it everywhere: in London, in Manchester, but also already in the little countryside towns. A big replacement is going on.

And let me tell you: your politicians have no plan, no vision and no idea how to deal with the problems that come along.

Problems like you have seen in Telford, Rotherham, and on Westminster Bridge.

All across Europe, there is a shadow hanging over our heads.

The French are whispering about in the Metro, the Germans murmuring about it when they feel unwatched, Italians look left and right, and if nobody is listening they tell you: “I don’t feel at home anymore in my street. We are becoming foreigners in our own country.”

And again and again I hear: “We are not allowed to talk about it.”

And that’s the bizarre drama of the ‘strange death of Europe’.

We are being replaced, conquered by radical Islam, and we are now allowed to talk about it!

Dear Britons, defenders of free speech. Out of my cell in Colnbrook, I want to ask you something. Be honest and raise your hands.

Who among of you has ever been in the following situation: You grab a beer after work, or you are visiting your girlfriend’s parents for the first time, or you meet other children’s parents at school – and suddenly the conversation moves to politics: radical Islam, immigration.

Who of you in this very moment was faced with the decision between speaking his mind and facing problems, or complying and staying silent?

Raise your hands and be honest.

I will not be able to see the results, but every single hand is too much.

This amount of fear should not exist in a society. Speech that has social costs and severe consequences is no longer free. It has a price — and our Government and the Antifa are working everyday to raise that price.

No freedom of speech means no democracy. In front of our very eyes this country is becoming a tyranny, shutting all debates about immigration down, until demographics solves the issue by replacement.

People of the UK. I might be in a cell right now, but you all are in a cell. It’s the prison of fear and silence your government and the PC tyranny has locked you in since the days of your childhood.

I ask you, I command you, break free!

Patriots of the UK: Come out of the closet. Make your dissent visible by visible acts of resistance that inspire others. I know for certain that millions in the UK think like me. Those millions should be on the street now.

We need a coming out of the silent majority or Britain is lost. We need a free, open and honest debate about immigration, Islam and demographics so we can sort these problems out together.

And I know that the force is still in you. With your Brexit vote you stunned the world!

The will and the life of the British nation is not broken.

Initially, I asked if Freedom of Speech is dead in the UK. You, every one of you who came today, is a living sign that the tradition of the UK is not dead!

You are the lively tradition of your nation, saving its face before history.

People of the UK – remember who you are! Remember your glorious past, you are sons and daughters of knights, kings, explorers, philosophers and artists.

Who is the sovereign in this country?

Is it big money?

It’s you – the people. You, the silent and invisible majority who said “NO” during Brexit. You can say “NO” again – no to Islamisation, no to mass immigration, and no to the great replacement.

And “YES” to your identity – yes to your security, yes to your heritage and the future for your children.

And all this is impossible without to Freedom of Speech.

I know that if these words will find their way to the UK and even to Speakers’ Corner, it will be victory for our cause.

If they did, and if you are hearing them now, I tell you: Go further on that winning street.

Don’t be afraid because we have an ally that is unbeatable: Truth!

The battle, our battle for freedom of speech, has just begun, and Speakers’ Corner will become a symbolic place in that struggle.

When you go home, know I want you to bring the spirit of Speakers’ Corner with you.

Every single person who raised his hand because he could relate to this moment of fear, when he did not dare to speak his mind.